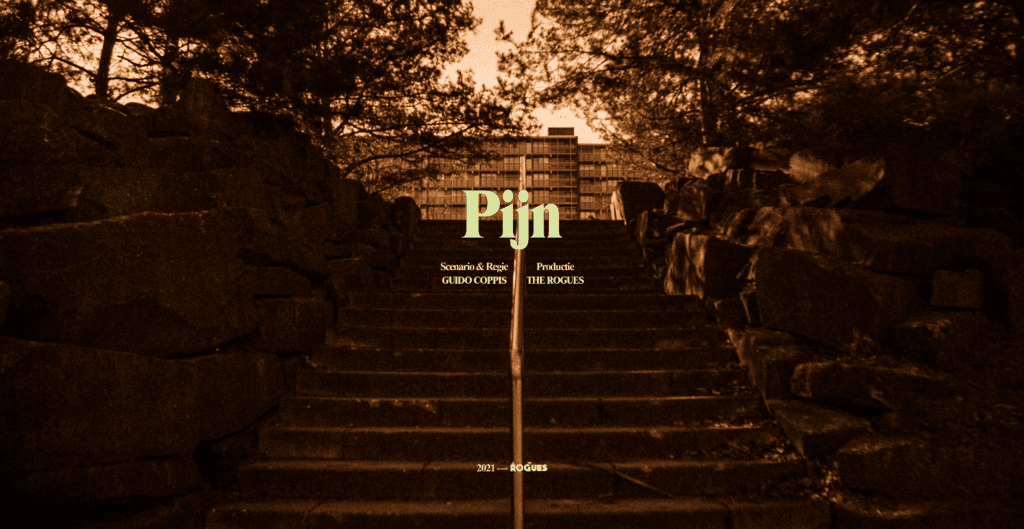 Mark suffers from an intense form of self-hatred, which translates into neglect, chilling and destructive behavior. When he meets Lisa, a loving but bizarre bond develops. His behavior frees her from her angelic yoke, but above all, her behavior holds up a mirror to Mark. This causes him to lower his shield, after which he finally begins to allow help.

Mark (30) has a destructive lifestyle that stems from the self-hatred he suffers from. He neglects himself in many ways. His gums, for example, which are rotting away and which he does nothing about. He considers himself too worthless to take care of himself and heal his pain.
Mark lives in an undefined, hopeless, impossible place that is slowly rotting away. Mark works in a shelter, where he is exploited by the owners, Cyrill (55) and Maria (54). Despite the fact that the owners are exploiting him, Mark is very caring towards the animals in the shelter. He even rescues a shepherd that Cyrill wants to attack because the animal has bitten him. Mark adopts the dog and names him Arti.
Mark is almost completely emotionless, almost nothing seems to matter to him. He also has a strange, unhealthy sexual relationship with Douglas (25), a heroin addict who is secretly in love with Mark. Mark’s mother Michelle (61) does her best to connect with Mark, but doesn’t understand him. Their relationship actually only makes Mark more lonely. One of the few people with whom Mark has a connection is Michael (35), his older brother who works as a night watchman at a rundown swimming pool where Mark visits him on a regular basis. For Michael, the pool has become a kind of fortress, where he has entrenched himself against the “evil” outside world. The latter has acquired a face in his eyes in the form of someone who throws glass into the pool. Mark has an unmistakable musical talent for the bugle, something he does nothing about, much to the frustration of his teacher Ruben (68). A bright spot in Mark’s life is his grandfather, Bernard (82). Bernard is in a hospice where he is dying slowly and peacefully. Bernard is blind. Mark and he share a close, warm bond and have their own language. Their relationship has a certain naturalness that stands out in the hermetic world in which Mark lives.
One day Mark meets Lisa (26). Lisa is a caregiver in hospice. Mark’s first impression of Lisa is that he is dealing with an exceptionally sweet girl, too sweet, angelic. Until he sees Lisa bullying an old woman by pulling the straw of her lemonade away every time she wants to drink. Mark and Lisa get into a conversation and slowly grow closer to each other. When Lisa, brings Mark home one night and tries to kiss him, they hurt each other. It is the unlikely beginning of their unlikely relationship. The bond between Lisa and Mark grows. Lisa’s genuine love for him softens Mark, but his self-hatred still prevails. Slowly it becomes apparent that a form of self-hatred is also present in her. Mark inspires her to break free from her sweet image, which feels like a coat that no longer fits her. When she follows Mark around one night and sees him beating up Douglas, Lisa’s behavior begins to change permanently. One day, Lisa deliberately drives into a man. Afterwards, she tells Mark that she actually wants to do it again. Lisa’s behavior becomes increasingly violent. For example, Lisa abuses, in front of Mark, and with a certain pleasure, his bosses Cyrill and Maria. While Lisa is perked up by her actions, Mark senses that Lisa is slowly crossing a line. Even over his limit.
When Mark and Lisa visit Bernard and Mark goes to get a drink for Bernard, Lisa points a revolver at the blind Bernard. Later that evening, Mark and Lisa are driving back home when Lisa sees a father and son walking the dog. Lisa stops the car, walks up to the father and son and shoots them dead. Mark is speechless. His dog Arti runs off after the murders, into the woods. The next day Mark is still overwhelmed, he doesn’t know what to do. To Lisa, it seems like nothing happened. Mark goes back to the scene of the murders one more time, where he sees the stiffened bodies of the father and son. Bernard dies some time later. Mark barely reacts to it. Even in this situation, he cannot admit his grief. Lisa, however, is genuinely emotional. Arti is still without a trace, his fate unknown.
Lisa’s heinous act has received no follow-up. Lisa is still searching for an alternative to her life as a sweetheart, which she cannot bear since she has known Mark. Although Lisa’s behavior is a lot less morbid than it was at the low point of the murder, Mark has set something in Lisa in motion that won’t let itself be extinguished. That fire may be smoldering for a while now, but when Mark sees mild signs of her extreme behavior again, it’s clear that it can easily reignite.
A small but definitive change also seems to be underway with Mark. Mark finally decides to visit the dentist to get his toothache treated, he finally accepts help. As he lies in the dental chair and the dentist cares for Mark with care, we see real emotion in Mark for the first time.